York church building to restaurant, with a few stops along the way 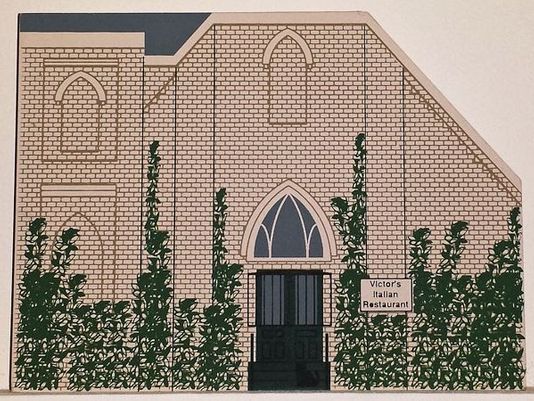 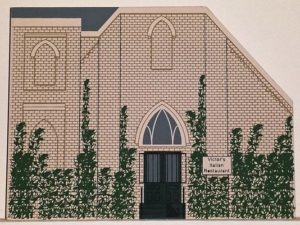 A Facebook friend asked about the history of Victor’s Italian Restaurant on Ogontz Street, knowing that the building was a former church. I looked through the York County History Center files and City Directories as well as online sources. Several newspaper articles on Victor’s in the YCHC restaurant file recapped the history of the site.

The Green Hill Evangelical Association built Bethany United Evangelical Church on the then named Bolls Avenue in 1905. After the congregation, now Bethany United Methodist Church, built their present building down the street at the corner of Mount Rose Avenue in 1925, the building housed various businesses over the next 60 years before becoming Victor’s. A sampling of city directories at the York County History Center shows Shellenberger’s grocery store there from the late 1920s up into the 1940s. Then Wilt and Miller had the grocery in the 1950s, and Eugene Weller was a barber at the same address. By the late 1950s the barber was still there, but the grocery was gone, replaced by Mount Rose Bar and Grill. The bar and grill continued business in the late 1970s through 1983, with the Phyllis Kohler Beauty Salon replacing the barber shop. (The street name was changed from Bolls Avenue to Ogontz Street in the early 1930s.)

One article says that Eunice and Harold Fitzkee purchased the building in 1984 and opened Victor’s Italian Restaurant. A February 1997 York Daily Record article relates that the Fitzkees named the restaurant after the first chef they hired, who was from South Philadelphia. The chef never showed up for the job, but they kept the name anyway.

The restaurant suffered a significant fire in April 2001, but the Fitzkees quickly renovated and reopened a few months later. They sold the restaurant in 2007 to a partnership of Lucien and Deb St. Onge, Mark and Marie Sindicich and Sam and Ann Marie Yost. According to Victor’s website, The Sindichiches and Yosts are the current owners, and George Sheffer, who worked there in his teens, has been the chef since 2008.

An extra tidbit:  John Grisham, the well-known author, has mentioned Victor’s in his writing. This stems from his discovering the restaurant about 20 years ago when his then teenaged son was playing in a baseball tournament at Memorial Stadium.

Speaking as an advocate for adaptive reuse of structures, Victor’s is a very positive example of what can be done with an older building, creating space for a successful business while retaining the character of the structure.