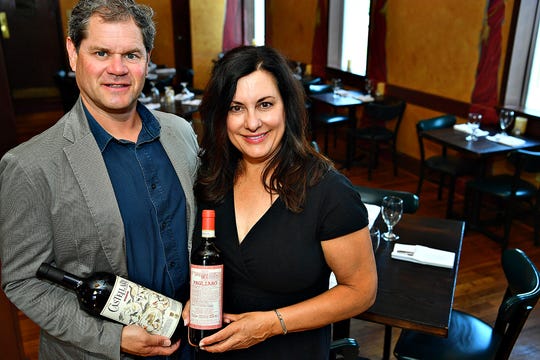 Owners Mark and Marie Sindicich are shown in the dining room of Victor’s Italian Restaurant in Spring Garden Township, Tuesday, July 16, 2019. Victor’s recently received the Award of Excellence for their wine selection and has been recognized by Wine Spectator magazine. Dawn J. Sagert photo (Photo: The York Dispatch)

Victor’s Italian Restaurant has offered fine dining in York County since opening in 1984, but for the first time in its 35 years, the restaurant has been recognized by Wine Spectator magazine for its wine selection.

“I was thrilled to see the recognition because I know how much work has gone into it behind the scenes by a lot of different people,” said Mark Sindicich, who co-owns the restaurant with his wife, Marie Sindicich.

Victor’s Italian Restaurant, in Spring Garden Township, Tuesday, July 16, 2019. Victor’s has been recognized by and given the Award of Excellence by Wine Spectator magazine. Dawn J. Sagert photo (Photo: The York Dispatch)

Victor’s Italian Restaurant offers a selection of about 100 wines on its menu.

The food and wine philosophy at Victor’s was born out of the wider European wine culture, said Mark Sindicich, in that the wine is one complementary piece of the overall dining experience as opposed to being the focus of the meal.

Some of the best pairings are between wine and dishes that originate from the same region in Italy, Sindicich said.

For example, food in northern Italy tends to feature more meats and fewer red sauces,  and the acidity of the wines made from grapes grown in that region cuts through the fat in the meat, he said.

The couple travels often, especially in Italy, and Mark Sindicich is working toward becoming a certified sommelier through the Court of Master Sommeliers, a title he expects to earn this fall.

He explained that providing the best selection of wines for dining patrons is about more than knowing the right food pairings and flavor notes. It’s also about making connections with distributors to secure difficult-to-find varieties.

Victor’s Italian Restaurant, in Spring Garden Township, Tuesday, July 16, 2019. Victor’s has been recognized by and given the Award of Excellence by Wine Spectator magazine. Dawn J. Sagert photo (Photo: The York Dispatch)

“If they sense your passion, and they know that you’re exposing people to it and that they have an interest in what you’re doing as well, it seems to build on itself,” he said of the distribution network in Pennsylvania.

The Sindiciches were part-owners of the restaurant from 2007 to 2017, when they became the sole proprietors.

Mark Sindicich said one of his goals for the restaurant has always been to find wines that seemed to mesh with the customers and the foods.

“I didn’t figure that we would be recognized until we felt comfortable that we were getting to a position that we could offer the whole package — you know, knowledgeable staff, a diverse wine list — and as far as I know, I don’t know if anyone in York has ever gotten one before,” he said of the Wine Spectator award.

Other regional restaurants that were recognized in the magazine’s 2019 list include Bricco in Harrisburg, Amorette in Lancaster and the Inn at Herr Ridge in Gettysburg.

For more information or to make reservations, visit victorsofyork.com or call 717-854-7958.